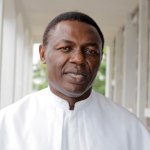 Rev. Fr Nkeze George Jingwa is the Pro-Chancellor and President of the Catholic University Institute of Buea (CUIB), Cameroon, and the Bishop\’s delegate for Special Duties, Government and Foreign missions for the Catholic Diocese of Buea, Cameroon, West Africa. He was a speaker at the 2009 International Symposium on African Education organized by the Salesian University (Rome), the university from where he obtained his PhD in Sciences of Education in 2007. He has a substantial experience in the field of education and academic arena. Rev. Fr. Nkeze has served as a College Principal, Diocesan Secretary for Education, the Pioneer Director of John Paul II institute of Theology for the Laity (JOPASIT) and Pioneer President of UIDB, Cameroon. Rev. Fr. Nkeze is a member of the International Association for Supervision and curriculum Development, ASCD, and a contributor to International and National periodicals such as the Periodicum Internationale trimestre editum a professoribus Pontificiae Studiorum Universitatis Salesianae-Romae, L\’effort Camerounais and Journal for Catholic Higher Education.

Recently he was selected as a member of the organizing committee representing the African Continent for the 9th International symposium on Catholic Social Thought and Management Education scheduled to take place in Manila, the Philippines in 2015. Rev. Fr. Nkeze\’s expertise is in Catholic and African-centred Education He also loves restoring the African identity.