Are You an Ethical Leader? How Do You (Really) Know?

Most leaders consider themselves to be ethical, but some of the behaviors that underlie the core competency of Integrity may not be as easy as they sound. There are pressures in business to make financial, personnel, contracting and other decisions every day that carry ethical implications—everything from honesty in reporting travel expenses, hiring contractors in accordance with IRS regulations, following general accounting standards, accurately projecting and reporting earnings, paying all taxes that are owed, and so on. Unfortunately, we have all heard about the careers of individual leaders, as well as the viability of entire organizations, that have gone down the tubes due to ethical lapses.

There are many forces out there which make ethical leadership a challenge at times. There are pressures to make decisions quickly, produce reports that are favorable for stockholders and potential investors, make things look good to the boss, to the board, and to company employees. There is a very real temptation to spin things positively, in ways we may think others will like, or in some cases in order to be self-serving.

How can leaders be consistently ethical, and even agree on what it means to lead ethically? In describing the characteristics of my Holistic Leadership comp 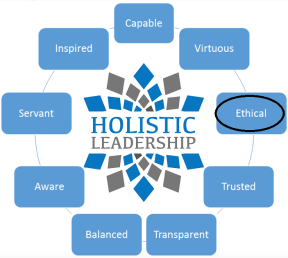 etency model, I propose that “ethical” leaders effectively use critical thinking skills, as well as their acute sense of right and wrong, to make ethical choices and “test” them before moving forward. When it comes to making decisions that affect people, it is a matter of treating others the way we would like to be treated—known as the golden rule. By “testing” decisions, I mean validating decisions with other leaders who are looking through an ethical lens, and in some cases talking with key stakeholders who will be affected by the decision to learn what they would consider to be fair or unfair.

Let’s look at a couple of examples. I spoke with business owner John Mundell, President of Mundell & Associates environmental consulting firm, an Economy of Communion business. He tells a story about a time when his company was pressured to make a political contribution in order to keep a municipal contract. He decided to make a small contribution, but along with the check he sent a letter saying that the purpose of the contribution was to encourage participation of citizens in the electoral process, and not to gain preferential treatment in contracting with the agency. He asked that the only basis they should use to consider him for future work was his company’s ability to deliver high quality environmental services to those who need his services. Period.

What happened was not totally surprising to him, but it was disappointing. Five new contracts were awarded, and his company did not receive one. It turned out that officials of all five companies personally knew the high-ranking political decision makers, and they had given much larger contributions than Mundell’s company. His first thought was, “Should I have given more?” but his second thought was, “…and sell my soul?” He felt at peace that he had done the right thing, and he believed that in the end good things would eventually happen if he continued to act ethically.

As it turned out, the next day Mundell was awarded a contract by another private party based on the quality of their work, and it was double the value of the municipal contract. As he reflected on this experience, Mundell said he was reminded that we are often put face-to-face with some darker realities in the world, and we would do well to step back and view our options in the light of ethical practices and an understanding of what is right.

The Golden Rule at Work

My second example comes from the Vice President of Human Resources for Cameron Mitchell Restaurants, Chuck Davis. The restaurant chain is known for their core philosophy of putting associates first. I asked Davis how they put this philosophy into practice day to day, and whether that ever leads to ethical dilemmas. His answer was that they try and give associates the benefit of the doubt; they seek to understand before making assumptions, and yes indeed, that can lead to ethical dilemmas.

In one situation, an associate had been caught stealing $60 from the cash register. Davis’ first thought, a very normal HR posture, was to simply fire the associate based on his dishonest act. The owner, Cameron Mitchell, encouraged Davis to ask a few more questions. Why did he steal the money? What was his situation at the time? Investigating further, Davis discovered the associate had stolen the money to support a drug habit, which in Davis’ view was another reason to let the associate go. But as he discussed the matter further with Mitchell, when considering the associate as a person—and not simply as the bad behavior he exhibited—the question that arose was, “How can we help?”

They decided not to give up on the associate. If he would agree to get the help he needed they would give him a second chance and let him keep his job. It turned out the associate was able to make the necessary personal changes and correct his problem. According to Davis, the ethical dilemma was weighing the value of honesty with compassion for the associate’s situation. Looking at the associate as a person first, they gave him a second chance if he would do his part. And he did. They treated him the way they would like to be treated—the golden rule.

This story made me pause. In my past role as an HR executive, had I ever asked these questions when I was about to let someone go: “Why did he/she do this?” and “How can we help?”

In closing, let’s go back to the question in the title of this article. How do you (really) know you are an ethical leader? This question invites you to be brutally honest with yourself: What are your real motivations and drivers? What are your assumptions? What are your blind spots? How are you rationalizing a certain decision? Are you testing decisions with others?

In addition to this type of self-reflection, another test is to ask the question that one of my previous CEOs taught me: “If my family knew the decision I am about to make, and why, would they be proud of me?” Give this question a try—it’s a powerful way to ask yourself if you’re doing the right thing. Ethical leaders are not afraid to ask, and they are not afraid to act based on the answer.

Jim Funk is a consultant who helps leaders, teams and organizations discover and develop their full potential. He is passionate in believing that strong leadership competence combined with the leader’s personal characteristics, values and virtues are key to achieving goals and driving business results. In addition to his work at J L Funk & Associates, Jim has served on various boards and commissions, and is currently a member of the Economy of Communion in North America Commission. Learn more about Jim’s work at www.jlfunk.com and www.linkedin.com/in/jlfunk or e-mail him at jim@jlfunk.com.

Our next meeting will be held online on March 22nd, at 1 PM ET.